The bomb fusing point is situated on the south-western side of the airfield in the open ground between the workshops and Bellman hangar. For the type of structure, it is surprising how close it was located to Dairy Hays Farm.

The “Nissen Hut” type structure is formed by the erection of 5” x 4” (125mm x 100mm) steel ribs at approximately 4’6” centres to form the semi-circle shape. The ribs were then cladded with heavy gauge galvanised “big six” sheets bolted to the frame work. The entire structure was then covered in earth to form a blast mound. To give extra protection, and in the case of any accidents the floor of the bomb fusing point was laid 4’6” (1.35m) below ground level.

Access was gained by pairs of doors at either end of the structure and a sloping ramp was also constructed at either end due to it being below ground level. These ramps were graded over a distance of 38’0” (11.6m).

Paperwork detailing the bomb quantity, bomb fuse type and fuse setting would be sent to the bomb fusing point in readiness for the arrival of the bombs. The bomb trolley would be towed into the nissen hut were the armourers would fit and set the bomb fuse in accordance with the instructions. Once fusing was completed the bombs were towed out of the fusing point exiting by the opposite end and then to the awaiting aircraft which were dispersed around the airfield. 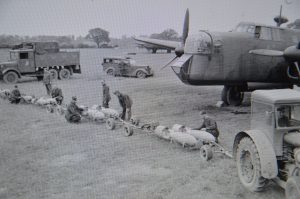 A Nissen Hut is a prefabricated steel structure made from a half-cylindrical skin of corrugated steel. Originally designed during the First World War by the engineer and inventor Major Peter Norman Nissen, it was used extensively during the Second World War.

The drawing reference number for the bomb fusing point at RAF Carew Cheriton is recorded on the airfield site plan as CCW.MS/36.

It was evident during a number of site inspections in the spring and summer of 2017 that the deterioration of the structure has accelerated and would soon be totally lost. A combination of metal corrosion and vegetation growth has almost destroyed the Bomb Fusing Point.

SN050026. The Bomb Fusing Point is located on land owned by the Carew Estate and is currently farmed by Summerton Farm.