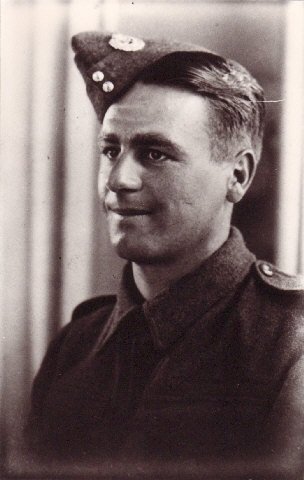 Eric was the Son of William and Elizabeth Ann Brock, and the husband of Lucy May Brock, of Pembroke. He served with 284 Assault Squadron, Royal Engineers, which was an armoured assault unit.Eric landed on the Normandy Beaches in June 1944, and took part in the break out of Normandy, and the drive north towards Belgium. On 20 October 1944, at a farm on Isabelleweg near the town of Ijzendijke, a horrific explosion occurred, which caused the death of forty-one British and Canadian soldiers and caused injury to another fifty-one some of which would be fatal. One of the dead was Eric. He was killed on 20 October 1944, aged 25, and is buried at Adegem Canadian War Cemetery, Belgium. The explosion was never fully investigated, but at the time, the men of 284 Assault Squadron were busy repairing and refuelling several tanks, and it is thought that an unstable load of nitroglycerine had exploded, killing the men.